Friday again? Well then it’s probably time for Richard and Joe have a little look see at all the comics news that they’ve noticed this week.

Want yourself a job in comics? How much would you expect to make?

Over at Creator Resource, a site for comic book freelancing tools and resources run by Stephanie Cooke, there’s a run-down of the page rates paid by various US comic companies, including Marvel, DC, and Image. At the moment the sample size is too small to really pull much from the findings, but a quick glance through the figures they have collected from comic pros makes fascinating reading. As Stephanie Cooke says:

”The survey aims to build a resource about standard rates in the comic book industry for comic creators. Additionally, we hope that this data will encourage professionals not to accept work that pays below a living wage.”

Flickering Myth and others are wondering if teaser clues director Duncan Jones (Moon, Warcraft, Mute) has been posting on his Twitter, including a short video clip that revealed a hairstyle that looked remarkably like that of a certain hugely popular, long-time 2000 AD character while he talks to himself about doing a comic based movie from a 2000 AD strip, is his way of hinting that he may be directing a Rogue Trooper film. With San Diego Comic Con in the offing perhaps we’ll hear more shortly. (art here by Dave Gibbons)

Update: Uncle Tharg dropped us an email on Tuesday morning before departing for SDCC to confirm that yes, Duncan will be directing a Rogue Trooper movie! Stak!!! Precious few details as it is at a very early stage, but terrific to hear the Rebellion team confirm this. I’ve been a fan of Duncan’s since he brought an early print of Moon to the Edinburgh Film Festival and Rogue has been one of the most popular 2000 AD characters of all time, right up there for fans with Dredd and Johnny Alpha as all time faves, and it is a story that can be handled in a reasonably self-contained way for a wider audience not familiar with the comics. 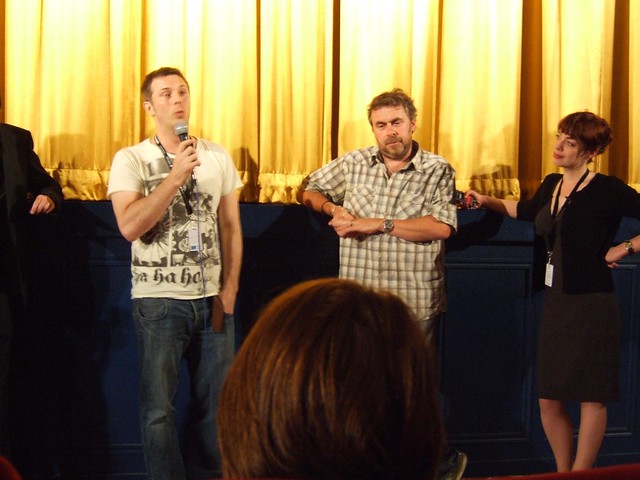 (Duncan Jones, on the left, talking to the audience after unveiling Moon to the Edinburgh International Film Festival audience in 2009, photo from Joe’s Flickr)

The BBC finally posts a teaser trailer for the new Jodie Whittaker Doctor Who. Even by teaser standards this is pretty brief and gives very little away, unfortunately, but I suppose this is the idea, just to whet our appetites. (via SyFy Wire)

Several interesting comics fundraisers currently running on Kickstarter, such as the second CelesSteel:

The excellent Brit small press Accent UK has a Kickstarter for a new noir-ish Western – Accent UK’s work is always good and well worthy of your support if you can (via Tripwire):

And another one via Tripwire – Steve Tanner and Timebomb comics has a Kickstarter running for Defiant, based on a very ancient epic poem:

Jeremy Briggs alerts us to Subversive Comics teaming up with Ghost in the Shell: Standalone Complex designer Paul Nicholson to work on a new comic series “Mayhem”, which looks pretty darned coo, and is currently running its Kickstarter:

Robin Hoelzemann has a Kickstarter for The Witching Hour, a Gothic fable, which I see comes with very nice endorsements by some other excellent creators like Emma Vieceli and Kieron Gillen to commend it:

Joss Whedon is working with HBO for a new show called The Never, which is based around a group of Victoria-era women who develop powers. Frankly you had us at “Joss Whedon”… (via IO9)

“Japan Nakama: Congratulations on the release of Mangasia – The Definitive Guide to Asian Comics. Could you give us a brief synopsis of your book?

Paul Gravett: Mangasia is obviously a word you haven’t come across before. It’s the words ‘manga’ and ‘Asia’ combined, implying that the book is 50% manga and 50% Asia. The idea is to show how Japanese manga has affected many regions within Asia and also to broaden the Western sense of it. It also highlights the fact that there are distinct and special kinds of comic cultures in other places like China, India, Philippines or Mongolia, where even though they may have been influenced by manga, they have their own deeper, sometimes earlier forms of comics that come through. Even though manga is the Godzilla in the room, these cultures have new styles that are innovative and exciting. The main problem for these other cultures is that none of them have been able to sustain their golden ages of incredible creativity and success. There hasn’t been a golden age for manga. Whereas Filipino comics had theirs in the 1950s/60s and to some degree the 70s.”

The Comics Journal, or TCJ as is it known in the comics community, has been an iconic publication for decades, became online only several years ago, but at San Diego Comic Con Fantagraphics announced they are bringing it back to physical print form, to the delight of those of us who can read on a screen but much prefer actual paper. TCJ #303 will be published in January 2019, with a twice a year publication schedule, under new managing editors RJ Casey and Kristy Valenti.

“Issue #303 features Gary Groth in discussion with the satirist and children’s book author Tomi Ungerer. “I’m looking forward to getting back in the saddle, a saddle I have missed, and conducting interviews with cartoonists, from young whippersnappers to vital legends, says Editor-In-Chief Gary Groth. “My long interview with Tomi Ungerer in this issue is a dream come true.”

This issue covers the “new mainstream” in American comics and how the marketplace and perception of the medium has drastically shifted since the “graphic novel boom” of the early 2000s and massive hits like Persepolis, Fun Home, and Smile. It also includes sketchbook pages from French-born cartoonist Antoine Cossé, an introduction to Alex Gard’s homoerotic gag cartoons out of the U.S. Navy by Mannie Murphy, Your Black Friend cartoonist Ben Passmore’s examination of the role art and comics have in gentrification, a reconsideration of the comics canon by Eisner Award-winner Dr. Sheena C. Howard, and much more.”

May the Toys be With You

Leicester has a new Star Wars exhibition, May the Toys be With You, opening on Saturday 21st July (with a special opening day event planned!). And as the press release points out there is a real local connection between the area and the massive, unprecedented success that Star Wars toy merchandising became:

“One of the UK’s finest collections of vintage Star Wars toys and original cinema posters is going on display in a stunning new exhibition at New Walk Museum & Art Gallery. Coalville was the base for Palitoy – the British company behind the iconic vintage toys – and this Summer Star Wars is coming home!

Back when the movie Star Wars broke box office records in 1977 no one could have predicted that the merchandising would go on to earn even more than the film itself. The toys of Star Wars took the world by storm and became the must-have playthings for an entire generation. From 1977 – 1985 an estimated 300 million action figures were sold, and this is a chance to discover the role Leicestershire toy company Palitoy played in this incredible global success story.

May The Toys Be With You is both a celebration of the now highly collectable vintage toy line and also of the iconic design work and art of the Star Wars movies. From X-Wing Fighters to lightsabers, these fantastical designs have fired our imaginations and stamped their place on our cultural landscape. For little kids and ‘big kids’ alike this is an unmissable opportunity to view many rarely seen Star Wars treasures, and young Jedi may even have an opportunity to dress up and wield a lightsaber themselves!”

Delighted to learn that the brilliant Nnedi Okorafor is writing a Black Panther spinoff, Shuri, for Marvel, with artwork by the excellent Leonardo Romero, inspired by the success of the Black Panther film and her character’s popularity in it. I absolutely loved Shuri in the film, smarter than her brother, capable, loyal, brave, determined and with a lovely impish humour. In fact I’d say that for a film that was ostensibly about fathers and sons the women in the cast largely stole that film.

And I’m really pleased to see Nnedi penning this – she is a remarkable writer, and like one of her great inspirations, the late Octavia Butler, she brings fresh perspectives to her science fiction (the Binti books from Tor are hugely recommended), and again it adds to mainstream comics not only a high quality, respected author from outside the medium, but also increases ethnic and gender diversity at the same time, which is no bad thing. I hugely enjoyed Leonardo’s art working with Kelly Thompson on Marvel’s Kate Bishop, Hawkeye series, which was one of my favourite mainstream comics of the last couple of years (it was pure comics delight) and I think he’s a great match for both writer and character. (via CBR)

The Lakes International Comic Art Festival has announced international partnerships with France’s Lyon BD Festival and the US-based National Cartoonists Society to bring a new comics event to Huntington Beach, California, in May 2019:

“The National Cartoonists Society has chosen the city of Huntington Beach, California, to host the inaugural NCSFest, a celebration of comics and cartoon art from all over the world. Based on the comic art festivals that are hugely popular in Europe, the festival will be held over the weekend of 17th – 19th May 2019.

Hundreds of the world’s most celebrated creators are expected to attend the three-day event, participating in seminars, exhibitions, workshops, panel discussions and signing sessions, the vast majority of which will be free to the public. Downtown Huntington Beach will be the setting, with all events staged beachside, on the iconic pier, at the city’s Arts Center and library and in local hotels and businesses, all within easy walking distance.

Top Shelf announced at San Diego Comic Con that the great George Takei – Mr Sulu to generations of us who have boldy gone where no-one has gone before (well, virtually, from our sofas) – is working with co-writers Justin Eisinger & Steven Scott and artist Harmony Becker on They Called us Enemy, detailing his family’s experience in the shameful internment of Americans of Japanese descent during WWII, including a very young George. In an era where rabble-rousers imprison young children and demand certain ethnic or religious groups are treated in a different manner this is a slice of history that is, sadly, all too relevant to today’s troubled world. They Called us Enemy is expected in 2019, and given George’s huge fanbase I’d expect this to be a big seller.

Haven’t done an Art For Art’s Sake for the longest time, but keep seeing these wonderful Andi Watson superhero portraits and wanted to share. And don’t forget, Watson’s Patreon page is open for business – http://patreon.com/andiwatson

And speaking of his Patreon…. the latest thing…