We Shall Fight Until We Win: a Century of Pioneering Political Women,
Edited by Laura Jones, Heather McDaid & Sha Nazir,
404 Ink / BHP Comics

Two small Indy Scottish publishers, BHP Comics (who are also behind the Glasgow Comic Con and the Edinburgh Comic Art Festival) teamed up with 404 Ink to create this anthology of “pioneering political women”, We Shall Fight Until We Win, which marks the century since (some) women got the vote in the UK with an all-woman creator team (nicely diverse line up too in terms of age, orientation, ethnic background, all encouraging to see) with short pieces on women from different decades across that century.

It’s a very interesting read, some tales being several pages, others being but a single page, and I admire the fact that they decided this would not take the route of only picking subjects most can admire, it also takes in subjects such as Margaret Thatcher because, even for those who loathed that very divisive politician the book cannot ignore that she was the first woman prime minister and the effect she had on changing politics in the UK, for good or ill, and while I personally cannot stand her I think it was indeed important that an anthology of this nature acknowledged her.

(page from Emmeline Pankhurst by Nicola Love and Charlot Kristensen)

The range of subjects is as wide as the backrounds of the creators here, some well-known – Emmeline Pankhurst, Nicola Sturgeon, Dianne Abbot – while others may only be familiar to those who have an interest in specific parts of history. That’s a good thing, of course, because it means even if you consider yourself fairly well-versed in history there is a good chance you are still going to find out about a remarkable person you hadn’t heard of before. I like that aspect of these kinds of works, it is no bad thing, regardless of age, to be exposed to new people and ideas and events.

I’m not going to go through each individual chapter and creators, but I must mention a few that stood out for me personally. I liked Kathryn Briggs and Heather McDaid’s The Glasgow Girls right from the first page; I loved the style, infused with touches of Mackintosh and Art Noveau, and the title, riffing on the famous Glasgow Boys art movement. While most of the entries here opt to highlight a particular individual, this one has a warm, cooperative, social, community feel to it, celebrating a group of young women – school girls at the time – who saw immigrant families being settled into their local neighbourhoods in and around Glasgow, many of whom had fled terrible circumstances.

(the Glasgow Girls by Kathryn Briggs and Heather McDaid)

The children of these refugee families would attend local schools and they became part of the community, so when the seemingly eternally short-sighted and cold-hearted Kafkaeque monster of the Home Office opted to eject some from the country, placing entire families (including children) into detention, these young girls acted, they organised, they protested, they whipped up support, they stood up for their friends, and by god they made a difference. I was very touched by this particular story, partly because it showed the power of good will, well directed, but also because it chimed with an element of Scottish identity which is dear to many of us, that “we’re aw Jock Tamson’s Bairns” (essentially meaning we’re all the same, regardless) and that no matter where you came from, when you live here with us, you are one of us. Which is not to say we don’t have bigotry and racism in Scotland, sadly we do have that ignorant hatred too, but there is a song social and community strand to the national identity that still wants to embrace that inclusivity and standing by one another, and it was wonderful to see such young women taking that lesson and applying it to help others.

Jenny Bloomfield and Grace Wilson’s Life and Times of Mhairi Black, the very young, working class woman who became an SNP MP and brought her blunt, no nonsense approach to the stuffy, rule-obsessed House of Commons and showed it what she thought of their arcane rituals and customs (she was there to represent her electorate and didn’t give a damn about the games and rituals older MPs played by, much to their ire), had me smiling as it summed up this firecracker. Hannah Berry told of a woman I hadn’t heard of, Jayaben Desai, who stood up not just against misogyny and racism but the simple exploitation more than a few uncaring company’s have used on their workers over the years, organising together, as a union, to fight for their rights, something that affects all of us.

Hari Conner and Durre Shahwar’s story of Noor Inayat Khan was remarkable, a descendant of Tipu Sultan, who volunteered to serve in the WAAFs (Women’s Auxiliary Airforce) during WWII, then trained by SOE and parachuted behind into Occupied Europe as a wireless operator, risking life and torture by the Gestapo to help liberate it from the Nazis, and paying the ulimtate price. I could read a whole book on that unbelievably brave woman, who was executed in the hell of Dachau, her last word reportedly a defiant “Liberte!”

I think the one that most emotionally affected me was Sabeena Akhtar and Erin Aniker’s The 60%. Like The Glasgow Girls this wasn’t about an individual, in fact this time not even about a small group, it was about, well, about most women. Not the ones in the history and politics texts who are remembered for their deeds and thoughts which changed the world, but for all the other women who didn’t have the “privilege to fight and franchise”, the mothers, aunts, the working women who then went home from that work to raise children and look after husbands. Your mother, my mother, our aunts, sisters and others who changed the world in other ways while raising us, caring for us, teaching us, setting an example while nurturing us. I think that particular story is pretty universal “and though you haven’t read their names, I’d wager you know their faces.” Of course we know their faces, they are our own family and friends.

(The 60% by Sabeena Akhtar and Erin Aniker)

I was lucky enough to hear BHP’s Sha Nazir and Heather Palmer, and 404 Ink’s Lauren Jones (see below) discuss the project on the opening day of the Edinburgh International Book Festival (my report on some of the comics and SF events from this summer’s festival is here), and it was fascinating to listen to how they went about this collaboration between the two Indy publishers (404’s first forary in comics). Not just in terms of embracing creators from a diverse number of backgrounds (something BHP has a strong ethos about, to their credit), but also from the production side – much of this work from new talent and established creators like Hannah Berry and Denise Mina (and our old chum and former FP blog reviewer Nicola Love, who I must give a shout out to) was solicited and completed and edited within two or three months. 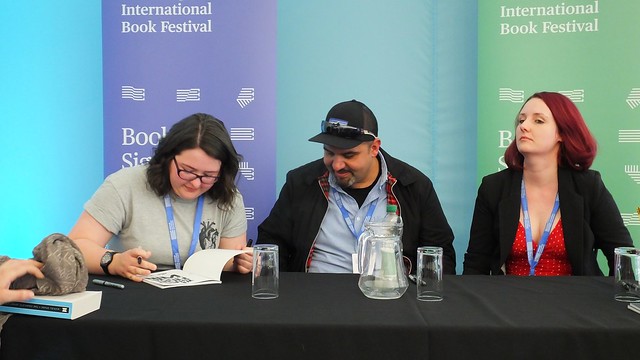 If these were two big publishers cooperating they would still be working out a legal document before they had started at that point! But being small and nimble BHP and 404 could push ahead quickly on that deal and the actual project to have it ready in a remarkably swift time period. I’m also heartened by hearing that copies have been going out to many school libraries in Scotland (despite BHP’s office & a lot of stock being sealed off after the awful Glasgow Art School fire making the area unsafe), and after chairing an event later at the festival with Sha Nazir several school librarians came over to chat about the book and other titles BHP had, and to note down other suggestions for graphic works they could use to help kids learn about complex subjects (librarians usually are very happy to take suggestions like that). It’s nice to know that this will be read in many of our schools; perhaps it will in its own way help continue the changes it documents and celebrates.