A Game of Thrones season eight gets a tiny trailer. Well, actually the glimpse here is so tiny the short trailer from HBO is shared with glimpses of two other shows, so you may need to keep hitting the pause button to see the GoT segments!

Alec Baldwin has joined the cast of Todd Phillips‘ upcoming Joker movie, with the veteran actor playing Thomas Wayne, alongside Joaquin Phoenix’s Joker. Baldwin, of course, has superhero movie credentials, playing in the mid 90s film take on one of the oldest comics superheroes, The Shadow, which didn’t set the box office alight, although I have a soft spot for its 1940s style. (via ScienceFiction.com)

Update: after I added this into this week’s Stuff more news broke later in the week saying actually Baldwin is not now going to be a part of that film. So there you go, in and out, two stories for the price of one in the same week! The fickle nature of the entertainment industry…

Bruce Lidl talks to the excellent Alex Robinson about his comics and podcasting over on The Beat. I will always have tremendous affection for Robinson’s Box Office Poison. Snippet:

“Bruce Lidl: How do you balance your time between comics and podcasting these days? Were you able to work on Our Expanding Universe at the same time you were recording Star Wars Minute episodes or did you need distance between the two endeavors?

Alex Robinson: Since moving to Portland two years ago we’ve tended to record the show in three or four big chunks in LA and NYC, doing several week’s worth of shows at a time, so recording isn’t too much of a conflict. The bigger challenge, actually, is balancing my art-related duties for the show (mostly Patreon drawings). I’ve always been a pretty monogamous artist, working on one project at a time, and I find it hard to switch gears. It always takes me a bit to get back into the groove of my own stuff and by the time I finally get there it’s time to stop and do more Star Wars drawings. But I realize that I’m lucky to be doing any of this stuff so I’m not complaining.

I don’t recall SWM being a big conflict when I was finishing up Our Expanding Universe.”

A reminder that the excellent Leah Moore and John Reppion have teamed up with Sally Jane Thompson for the forthcoming Conspiracy of Ravens, which is coming from Dark Horse this autumn. From the description: “Teen schoolgirl Anne unexpectedly inherits a mysterious locket and a crumbling English mansion estate from her long-lost aunt. She unearths the family secret that she’s part of a magical legacy that gives her fantastic abilities, and she isn’t the only girl whose family is involved. But not all the girls are so willing to use their new powers for good… For fans of Harry Potter, Savvy, Ella Enchanted, and The Phantom Tollbooth.”

Leah and John are always a writing team I’d recommened, and Sally’s work is wonderful, so that recommendation goes double. And given the recent hardships Leah and John have been going through (see earlier Stuff posts), I’m sure it would be a good personal as well as professional boost to them to see a lot of readers picking this up.

The Ignatz Awards shortlist was announced this week, chosen by a jury comprising Leila Abdelrazaq, Kevin Czap, Mita Mahato, Carolyn Nowak and Taneka Stotts, with the winners to be announced at the 2018 Small Press Expo. (via Comics Beat):

Why Art? – Eleanor Davis
Run for It: Stories of Slaves Who Fought for Their Freedom – Marcelo D’Salete
Uncomfortably Happily – Yeon-sik Hong
The Lie and How We Told It– Tommi Parrish
Anti-Gone – Connor Willumsen

Yellow Negroes and Other Imaginary Creatures – Yvan Alagbé
Why Art? – Eleanor Davis
Rhode Island Me – Michael DeForge
How the Best Hunter in the Village Met Her Death – Molly Ostertag
The Lie and How We Told It– Tommi Parrish

Luke Arnold, known for his role as one of fiction’s best-known pirate, Long John Silver, in Black Sails, has turned his skills to writing, with a new urban fantasy series, with the first novel, The Last Smile in Sunder City, to be published by major SF&F house Orbits Books, which the Daily Dot described thusly “The Last Smile kicks off in the aftermath of a war between humans and magical creatures, which caused magic to vanish from the world. The main character, Fetch Phillips, is a private detective working in Sunder City, trying to find redemption after his own role in the war. A fantasy riff on a classic noir concept.”

Indian actor Soundarya Sharma has joined the cast of the eagerly-anticipated Wonder Woman 1984 movie. Her role is being kept secret for now, but the actor has commented that for her it is “a ‘dream coming true’ situation”, which sounds intriguing, and may hint that she will be portraying a character well-known to comics readers. (via CBR)

London’s Orbital Comics is hosting an exhibition by one of the most remarkable of our younger crop of new comics talent, Tillie Walden, with The Art of On a Sunbeam running from September 21st to October 4th. On a Sunbeam itself is published by the very fine folks at Avery Hill late in September.

Down The Tubes reports on a slew of alternate covers for the first issue of Titan’s first issue of the Doctor Who series starring the Thirteenth Doctor. I’m especially taken with the covers by regular Who artist Rachael Stott:

And this lovely work by Babs Tarr:

A new clip has surfaced from the forthcoming Luca Guadagnino (Call Me By Your Name) take on Dario Argento’s classic horror film Suspiria. I’m usually wary of any remake, especially of such an influential and much loved film, but on the other hand this production includes the great Tilda Swinton, which is never a bad thing. (via Live for Film)

A short featurette highlights the choreography of the fight sequences in the upcoming second season of Netflix’s Iron Fist:

The Guardian reports on the alternative Nobel Prize for Literature, which was set up in response the the shameful scandal of alleged sexual harassment and assault within the hallowed halls of the official Nobel Award (it’s terribly sad to see even the halls of good literature degraded by this sort of behaviour, but it is good to get it in the open and deal with it). A group of Swedish cultural figures came together to create an alternative as this scandal meant there would be no 2018 Nobel for Literature.

As the Guardian article notes the New Academy prize, rather nicely, does not meet in secret deliberation like the Nobel but is open, and in fact asked numerous Swedish librarians for their nominations. I like that part of it a lot. And the focus is less on the “most outstanding work” as the official Nobel is an instead is aiming to celebrate writers who tell stories of “humans in the world.” And what are all our stories, if they are not about people and their lives, even when we create mythological characters, animal characters or even aliens, our stories all reflect human needs, grievances, desires and hopes and fear. 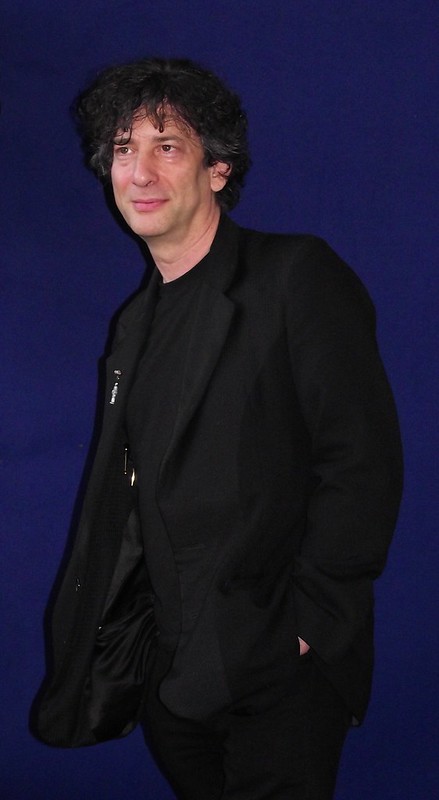 (Neil Gaiman at the Edinburgh International Book Festival, photo from my Flickr)

The shortlist has been selected from a longlist of 47 writers, and I am delighted to see one of my personal favourites on it, Neil Gaiman. On hearing the news Neil responded “Winning would not make me any happier than being on that list makes me. So I don’t think of it as being up against opponents, just as being in glorious and honoured company.” The other shortlisted writers include the brilliant Haruki Murakami, an author I have long enjoyed and recommend, and two that I haven’t read myself (yet), Caribbean writer Maryse Condé, and Vietnamese-Canadian writer Kim Thúy. Good to see writers of different gender and ethnic backgrounds all on this shortlist too. More of that, please, the greater the plurality of author’s voices, the more diverse and interesting our reading will be. And the world is better for that. And if you will forgive my indulgence I am going to post a quote from the New Academy, because I think it is right and it is important:

“The New Academy was founded to warrant that an international literary prize will be awarded in 2018, but also as a reminder that literature should be associated with democracy, openness, empathy and respect. In a time when human values are increasingly being called into question, literature becomes the counterforce of oppression and a code of silence. It is now more important than ever that the world’s greatest literary prize should be awarded.” The award will be announced in December.

Den of Geek reports that a Looney Tunes icon is returning: Warner Bros are giving the eternally doomed by his own mad schemes and devices Wile E Coyote his own movie outing! I imagine sales in the Acme company surged on this news…

Chris Riddell in the Guardian:

Headlines in The Nib on Louis CK’s unexpected (and much-derided) return to stand up:

Julia Bernhard in The Nib:

One Response to Stuff (& Possibly Nonsense) #174